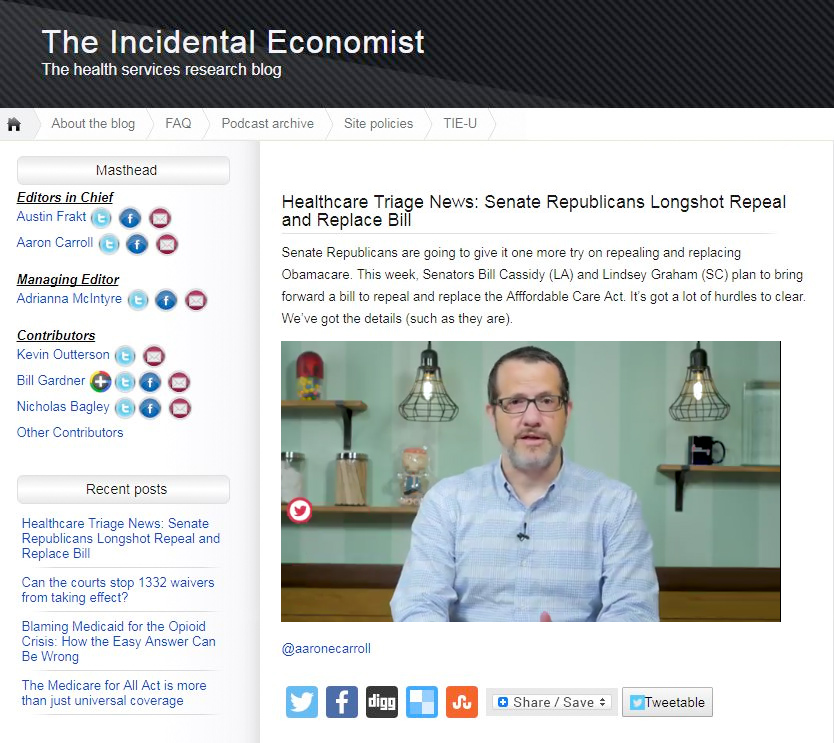 The following originally appeared on The Upshot (copyright 2018, The New York Times Company).

The idea that spending more on preventive care will reduce overall health care spending is widely believed and often promoted as a reason to support reform. It’s thought that too many people with chronic illnesses wait until they are truly ill before seeking care, often in emergency rooms, where it costs more. It should follow then that treating diseases earlier, or screening for them before they become more serious, would wind up saving money in the long run.

Unfortunately, almost none of this is true.

Let’s begin with emergency rooms, which many people believed would get less use after passage of the Affordable Care Act. The opposite occurred. It’s not just the A.C.A. The Oregon Medicaid Health Insurance experiment, which randomly chose some uninsured people to get Medicaid before the A.C.A. went into effect, also found that insurance led to increased use of emergency medicine. Massachusetts saw the same effect after it introduced a program to increase the number of insured residents.

Emergency room care is not free, after all. People didn’t always choose it because they couldn’t afford to go to a doctor’s office. They often went there because it was more convenient. When we decreased the cost for people to use that care, many used it more.

Wellness programs, based on the idea that we can save money on health care by giving people incentives to be healthy, don’t actually work this way. As my colleague Austin Frakt and I have found from reviewing the research in detail, these programs don’t decrease costs — at least not without being discriminatory.

Accountable care organizations rely on the premise that improving outpatient and preventive care, perhaps with improved management and coordination of services for those with chronic conditions, will save money. But a recent study in Health Affairs showed that care coordination and management initiatives in the outpatient setting haven’t been drivers of savings in the Medicare Shared Savings Program.

There’s little reason to believe that even more preventive care in general is going to save a fortune. A study published in Health Affairs in 2010 looked at 20 proven preventive services, all of them recommended by the United States Preventive Services Task Force. These included immunizations, counseling, and screening for disease. Researchers modeled what would happen if up to 90 percent of these services were used, which is much higher than we currently see.

They found that this probably would have saved about $3.7 billion in 2006. That might sound like a lot, until you realize that this was about 0.2 percent of personal health care spending that year. It’s a pittance — and that was with almost complete compliance with recommendations.

One reason for this is that all prevention is not the same. The task force doesn’t model costs in its calculations; it models effectiveness and a preponderance of benefits and harms. When something works, and its positive effects outweigh its adverse ones, a recommendation is made.

This doesn’t mean it saves money.

In 2009, as part of the Robert Wood Johnson Foundation’s Synthesis Project, Sarah Goodell, Joshua Cohen and Peter Neumann exhaustively explored the evidence. They examined more than 500 peer-reviewed studies that looked at primary (stopping something from happening in the first place) or secondary (stopping something from getting worse) prevention. Of all the interventions they looked at, only two were truly cost-saving: childhood immunizations (a no-brainer) and the counseling of adults on the use of low-dose aspirin. An additional 15 preventive services were cost-effective, meaning that they cost less than $50,000 to $100,000 per quality adjusted life-year gained.

But all of these analyses looked within the health care system only. If we really want to know whether prevention saves money, maybe we should take a wider perspective. Does spending on prevention save the country money over all?

A recent report from the Congressional Budget Office in the New England Journal of Medicine suggests the answer is no. The budget office modeled how a policy to reduce smoking through higher cigarette taxes might affect federal spending. It found that such a tax would cause many people to quit smoking — the desired result. In the short term, less smoking would lead to decreased spending because of reductions in health care spending for those who had smoked.

In the long run, all of those people living longer would lead to increases in spending in many programs, including health care. The more people who quit smoking, the higher the deficit from health care — barely offset by the revenue from taxing cigarettes.

But money doesn’t have to be saved to make something worthwhile. Prevention improves outcomes. It makes people healthier. It improves quality of life. It often does so for a very reasonable price.

There are many good arguments for increasing our focus on prevention. Almost all have to do with improving quality, though, not reducing spending. We would do well to admit that and move forward.