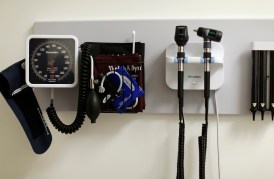 If you probe the healthcare stuff on presidential and congressional candidate websites, peruse partisan talking points and fund-raising letters, and parse actual or pending policy proposals, you find that each and every plan now in rhetorical or legislative play for reforming the federal role in healthcare lays claim to the same trinity of healthcare reform goals: access, affordability, and quality. To be sure, some plans are more motivated and focused on increasing coverage (access) relative to containing costs (affordability), but the disagreements nonetheless center on how best to achieve greater access, affordability, and quality.

Before you shrug off or yawn past the fundamental agreement on what we value most when it comes to healthcare, recognize that as little as a quarter-century ago there was no such agreement.

Right, you scoff, and all the candidates are also all for “peace and prosperity,” too. Actually, they’re not all for “peace;” and, before you shrug off or yawn past the fundamental agreement on what we value most when it comes to healthcare, recognize that as little as a quarter-century ago there was no such agreement.

In the early 1990’s, nearly a dozen major healthcare reform plans were discussed and debated, including (as only federal healthcare reform trivia buffs may recall) McDermott-Wellstone, Michael-Lott, Cooper-Breaux, Thomas-Chafee, and, of course, the Clinton administration’s plan for regional “health alliances” and a “national health board” to set premium targets for each “health alliance.” During the debates over those and other plans, accessibility was still closer than not to being an ideologically charged policy preference that divided Democrats and Republicans.

Intense debates have surrounded and hounded the Patient Protection and Affordable Care Act of 2010, a.k.a., the “ACA” or “Obamacare;” but, compared to a decade ago, and certainly compared to a quarter-century ago, there are now fewer elected voices in either party doubting (and none that I could find openly denying) that accessibility, as in ensuring that people of every demographic description and socioeconomic status are duly insured, is both absolutely essential and highly desirable.

By the same token, today’s fights over affordability qua cost-containment metrics and price-reduction imperatives now center not on the ends, but almost entirely on the means—strongly free market to strongly not, and strongly national government-centric to strongly not. The fact that policymakers all opt to use such rhetoric is revealing, even if some spout it disingenuously. If you take the respective policymakers at their word, affordability is no longer a primarily conservative or Republican healthcare reform concern, not any more than accessibility is a purely progressive or Democratic concern.

Regarding quality, it’s not, of course, that anyone ever opposed it as such, but rather that calls for better quality now punctuate the healthcare policy discourse in a pervasive way that they once did not—not even during the early days of the debate over what became Obamacare. Quality is now virtually everyone’s de rigueur healthcare reform plan qualifier, as in routine promises and reflexive reassurances that increasing access or enhancing affordability is never to be achieved by providing outmoded treatments, discounting ineffective drugs, or serving up yesteryear’s best medicine rather than today’s best.

This relatively new consensus on healthcare reform values leads to at least three questions worth pondering.

First, among the public at large if not among elected leaders, what, if any, other reform-relevant core values are held dear by most people? It’s hard to know, but in their April 2019 Heritage Foundation brief on opinion surveys about healthcare, Elizabeth Fender and Marie Fishpaw, in effect, nominated one: “choice.” They highlighted mass support for “lower costs” and “access to high quality” care, but also cited a March 1, 2019 online survey in which 91 percent agreed that “Americans should have more choices for their health care,” and 90 percent agreed that “Patients—not bureaucrats—should choose how health care is provided.”

Second, whatever the fate of this or that healthcare reform proposal, what about the Big Three programs that together now account for about 25 percent of the entire annual federal budget— Medicare, Medicaid, and the Children’s Health Insurance Program (CHIP)?

Very old news flash: Medicare might or might not become “Medicare for all,” but it is as politically sacred as Social Security. During his two terms in office, President Ronald Reagan not only walked back his famous 1960’s speeches condemning “socialized medicine,” but actually pushed for and won huge expansions in Medicare spending and coverage. The mid-1990s saw the last serious runs at rolling back Medicaid, and they all failed. And, in the mid-2010’s, many governors rejected more federal funds for Medicaid courtesy Obamacare, but most did while claiming that the decision would favor greater access, affordability, and quality for Medicaid recipients.

Established in 1997, CHIP has often been a partisan and ideological political football. Even today, you could fill several double-decker busses with CHIP’s mostly Republican congressional foes; but, you could also then drive them to a party celebrating the program’s 30th birthday. Following several years of legislative battles, including ones that got tangled up with the last federal government shutdown, in 2018 CHIP was reauthorized through 2027. Even its opponents went on record touting it as a triumph for low-income children’s access to affordable, high-quality care.

Can the federal government actually do what the public wants? Nobody truly knows the answer.

Third, finally, and looking ahead, can the federal government actually do what the public wants? Nobody truly knows the answer. Worse, judging from the appalling lack of administrative, how-to-do-it detail that accompanies the assorted plans for reforming the federal role in healthcare, nobody seems terribly interested in finding out.

This is, of course, nothing new. As little as most people know (or care) about the actual legislative and fiscal realities, they know (and care) even less about how any given healthcare reform plan would be translated from campaign promises and policy rhetoric into actual administrative action.

For instance, writing on the eve of the ACA in his book The Next American Government, Donald F. Kettl observed that our Big Three healthcare programs, Medicare, Medicaid, and CHIP, were primarily the administrative province of the Centers for Medicaid & Medicare Services (CMS), an agency within the U.S. Department of Health and Human Services (HHS) that has fewer than 5,000 full-time federal employees—fewer full-time staff members than Kettl’s then-academic home, the University of Pennsylvania, employed. And writing for Brookings, Sheila Burke and Elaine C. Kamarck outlined the challenges and capacity of CMS to oversee even the ACA. How could such a tiny agency coordinate or control, manage or monitor, those three existing mega-programs, let alone be reasonably expected to onboard and oversee, institute and implement, any major changes to the federal role in healthcare?

The answer is that the one agency charged with overseeing healthcare is already facing a capacity crisis. The sad and sorry administrative saga of Obamacare in the 2010’s was only the latest example of how, for several decades now, would-be presidents, Washington policymakers, and activists in both major parties have debated and, in some cases, enacted healthcare reform plans that, were, administratively speaking, at best bridges to nowhere and at worst, maps to mismanagement and mayhem.

For instance, in the early 1990’s, had the ambitious Clinton healthcare plan with its “alliances” not gone down to legislative defeat, it would have experienced an administrative meltdown because its key provisions assumed a system of intergovernmental relations and state-level capacities that did not exist and could not have been created “after the fact.”[1] Much the same could be said for the many Medicaid reform plans that were touted in the mid-1990s.[2]

Administrative workability, as much or more than political feasibility or fiscal sustainability, has been the Achilles heel of every major healthcare reform initiative attempted or made over the last thirty years.

Likewise, beginning with the “health exchanges,” profound administrative problems, well beyond “computer glitches” or “technology troubles,” have plagued the ACA.[3] Administrative workability, as much or more than political feasibility or fiscal sustainability, has been the Achilles heel of every major healthcare reform initiative attempted or made over the last thirty years. In Middle Way Healthcare Reform, a July 2019 report by Penn’s Partnership for Effective Public Administration and Leadership Ethics (PEPALE), Richard P. Nathan and Praveen Rajaguru emphasize how deeply entrenched and devilishly hard to manipulate are the ways in which America presently administers healthcare.

Administratively speaking, they suggest, healthcare in America has been, and continues to be, a loosely interconnected but deeply entrenched set of institutional structures and information systems that variously serve more or less distinctive subpopulations: senior citizens and the disabled; low-income children and families; tax-benefitted private employees and their dependents; federal civilian workers; active-duty military personnel; state and local public employees; and subgroups like police and fire personnel, teachers, and corrections officers.

Reforming the federal role in healthcare in ways that respect the consensus favoring greater access, affordability, and quality would be just wonderful. But what my Brookings colleagues and I preached in the introduction to our aforementioned 1995 book on federal healthcare reform applies more urgently to today’s competing reform plans than it did to those we probed a quarter-century ago:

Making it work will require sustained effort, from the earliest phases of policymaking, to identify and solve the critical management problems…. Even the most incremental national plans that promise phased-in reforms but gloss over the…realities of policy implementation are bound to get lost in the administrative maze of public, private, and nonprofit organizations that now finance and deliver health care to most Americans.

John J. DiIulio, Jr. is the Frederic Fox Leadership Professor at the University of Pennsylvania, Faculty Director of Penn’s Partnership for Effective Public Administration and Leadership Ethics, and a Non-Resident Senior Fellow at the Brookings Institution.

[1] A tale told in Making Health Reform Work, a 1995 Brookings volume that I co-edited with Richard P. Nathan.

[2] As chronicled in a 1998 Brookings volume, Medicaid and Devolution, which I co-edited with Frank J. Thompson).

[3] As detailed in the series of state-by-state reports on the ACA’s implementation that Brookings in concert with the Rockefeller Institute of Government produced in the 2010’s, co-led by the late, great Alice Rivlin and Richard P. Nathan.