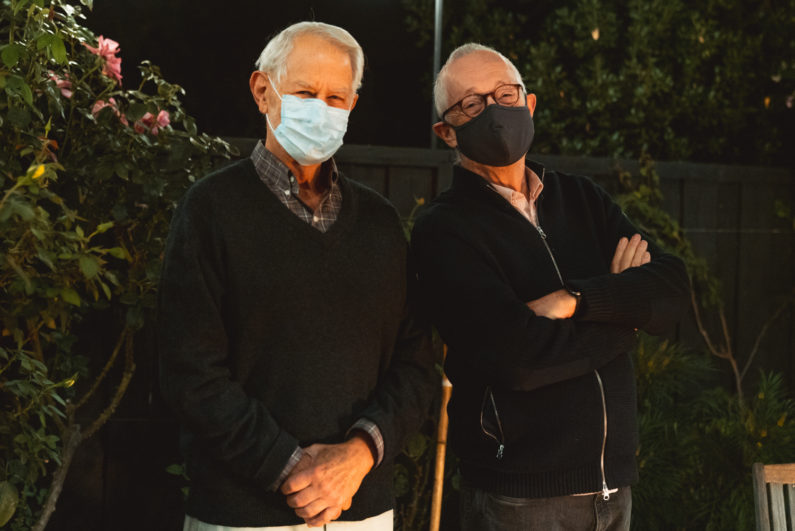 In my limited experience (but not just limited to my own experience) Nobel prizewinners are often asked about how they were notified of the fact that they won the prize, and by whom. Paul Milgrom and Bob Wilson certainly have one of the best stories to answer that question, and millions of people have already viewed the video from the Milgroms’ Nest doorbell camera, as Bob tried to arouse Paul and give him the news.

Paul Milgrom discovered via a Nest camera that he’d won the Nobel Prize in Economic Sciences.<>

The Nest doorbell broadcast also to Paul’s wife Eva, who was visiting family in Stockholm, and who was alerted at the same time he was. Here’s the view from the Swedish press (including a video of the video playing on her laptop…):

Här väcks pristagaren av sin kollega: ”Du har vunnit Nobelpriset” ,
(Google translate: Here the laureate is awakened by his colleague: "You have won the Nobel Prize")
That before-dawn encounter was recounted in this early interview:
Telephone interview with Robert B. Wilson following the announcement of the 2020 Nobel Prize in Economic Sciences. The interviewer is Adam Smith, Chief Scientific Officer of Nobel Media.
"AS: We just spoke with Paul Milgrom and he said that he heard the news by you walking across the street and ringing his doorbell.
RW: Well that’s right because he had turned his phone off for the … to get a good night’s sleep, and so somebody had to wake him, and he lives across the street so I just walked over and knocked on the door. I roused him.
AS: I think … I think this must be a first in the history of the Nobel Prize.
RW: Yes, how many times does … first to have a knock on the door, which sounds like something from the 19th century, and secondly that in fact the two of us live only, what, 40 m apart."
*****************
It turns out that Bob Wilson went to Lincoln High School in Nebraska (and that you can never escape your high school):
Lincoln High alum wins Nobel Prize in economics
MARGARET REIST, Lincoln Journal Star Oct 13, 2020
"The Lincoln High School wall of distinguished alumni — the one with photos lining the school’s main hallway — will need to make room for another photo.
"Robert Wilson, who graduated from Lincoln High in 1955, left for Harvard on a prestigious scholarship and ultimately landed at Stanford, won the Nobel Prize in economics Monday."
***********
Stanford published this picture: Stanford economists Paul Milgrom and Robert Wilson win the Nobel in economic sciences

The day of the prize, the NY Times story by Jeanna Smialek got this fairly coherent quote from me before dawn:
“They haven’t just profoundly changed the way we understand auctions — they have changed how things are auctioned,” said Alvin E. Roth, a Nobel laureate himself who was one of Mr. Wilson’s doctoral students.
***********
Joshua Gans, one of Paul’s students, republished the remarks he had made on the occasion of Paul’s 65th birthday (long ago…)
"There are so many things one could say about Paul but it turned out that I said what I wanted to say back in 2013 at a conference in his honor to celebrate his 65th Birthday."
*************
Bob’s longtime colleague (and my one time housemate when we were grad students) David Kreps has a lovely essay, which includes this quote from Hugo Sonnenschein:
"Great economists write great papers. But the greatest economists are those who found new schools of thought."
David Kreps Lauds 2020 Nobel Laureate Robert Wilson
He writes that Bob’s
" impact on the discipline of economics, in my opinion, puts him in the company of giants such as Ken Arrow and Paul Samuelson: Bob is, as much as anyone, the founder of the “School of Economic Theory as Engineering.” Both in his own work, but even more through his influence on his students and colleagues, Bob has brought economic theory to the real world, both as a mechanism for understanding “how things work” and then in the design of better institutions. The Nobel Prize announced today is for his and Paul’s work on the design of complex auctions, such as the spectrum auctions, which is a prime example of economic theory as engineering. But, in addition:
***************
Did you know that Paul has a company?  Here’s the tribute on the Auctionomics website:
Could the work of the latest Nobel laureate in economics be the key to America winning the 5G race with China?
***************
And amidst all the toasts, I had occasion to recall that the first footnote of my 2002 paper "The Economist as Engineer…" said
"This paper is dedicated to Bob Wilson, the Dean of Design."
***********
Earlier post: