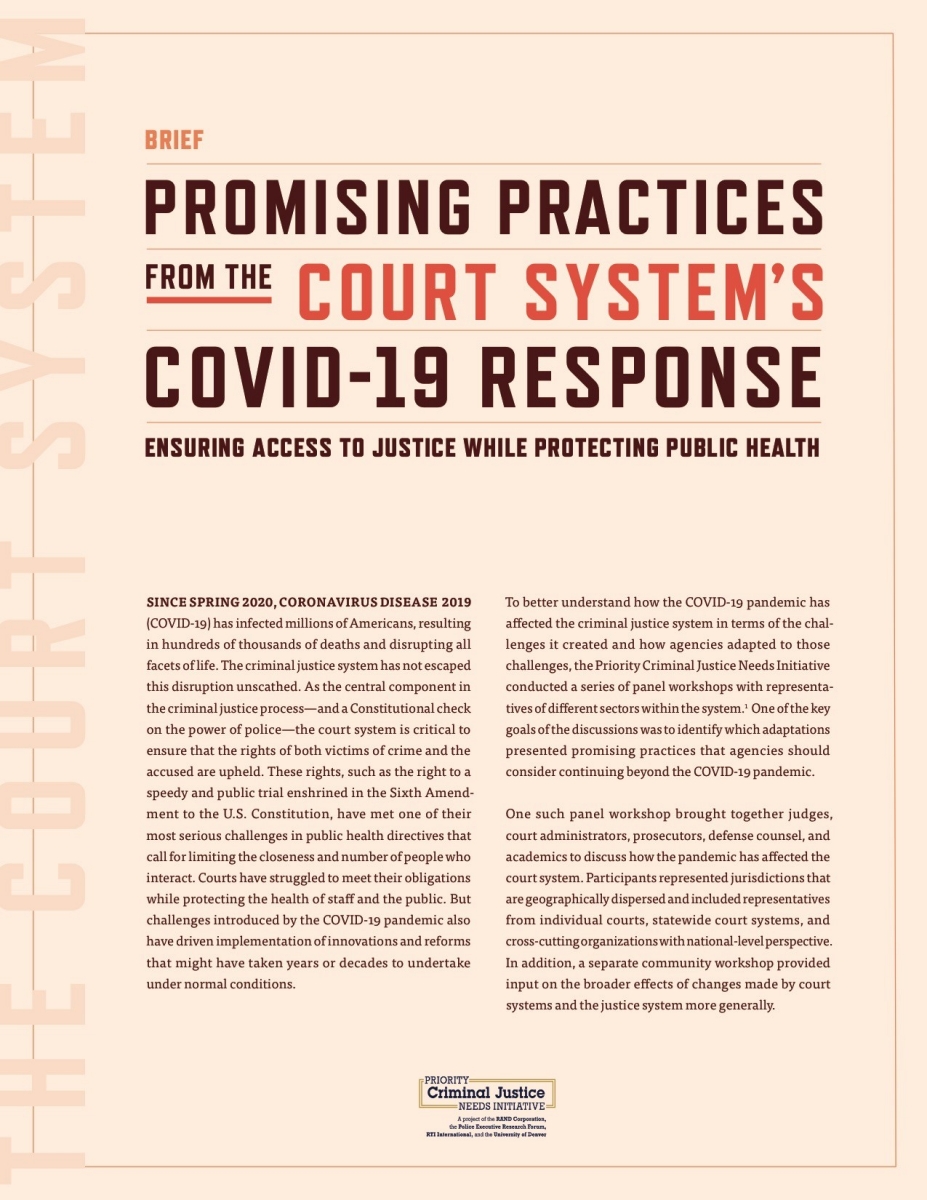 Photo by Administrative Office of the U.S. Courts

This brief highlights the challenges the COVID-19 pandemic introduced, shows how courts adapted to those challenges, describes which adaptations may hold promise to even after the pandemic ebbs, and provides suggestions for evaluations to demonstrate the efficacy of such adaptations.

Since spring 2020, coronavirus disease 2019 (COVID-19) has infected millions of Americans, resulting in hundreds of thousands of deaths and disrupting all facets of life. The criminal justice system has not escaped this disruption unscathed. As the central component in the criminal justice process—and a Constitutional check on the power of police—the court system is critical to ensure that the rights of both victims of crime and the accused are upheld. These rights, such as the right to a speedy and public trial enshrined in the Sixth Amendment to the U.S. Constitution, have met one of their most serious challenges in public health directives that call for limiting the closeness and number of people who interact. Courts have struggled to meet their obligations while protecting the health of staff and the public. But challenges introduced by the COVID-19 pandemic also have driven implementation of innovations and reforms that might have taken years or decades to undertake under normal conditions.

To better understand how the COVID-19 pandemic has affected the criminal justice system in terms of the challenges it created and how agencies adapted to those challenges, the Priority Criminal Justice Needs Initiative conducted a series of panel workshops with representatives of different sectors within the system.[1] One of the key goals of the discussions was to identify which adaptations presented promising practices that agencies should consider continuing beyond the COVID-19 pandemic.

One such panel workshop brought together judges, court administrators, prosecutors, defense counsel, and academics to discuss how the pandemic has affected the court system. Participants represented jurisdictions that are geographically dispersed and included representatives from individual courts, statewide court systems, and cross-cutting organizations with national-level perspective. In addition, a separate community workshop provided input on the broader effects of changes made by court systems and the justice system more generally.

Why Was the COVID-19 Pandemic so Challenging for Court Systems?

The Number of People Involved

The sheer number of people who interact in the court system is enormous. Beyond the accused, who might be held in custody in jail settings before and during a trial or who might be released pre-trial, courts employ judges, administrative employees, security staff, and others, and cases have associated prosecutors, defense counsel, witnesses, forensic examiners, and citizens summoned to serve on grand and trial juries. Individuals affected by the crimes also have the right to observe and participate in the process, and in some cases, this right is legally or Constitutionally protected.

In addition, other activities bring people to the courthouse for access to justice, including seeking protection orders, solving civil disputes, and handling other administrative matters. Courts are also largely open to the public, and there is a Constitutional imperative for them to remain so, because the actions of the courts should be open to public scrutiny as a protection of individual rights and a check on government power.

In a major courthouse, where multiple cases and other court services occur simultaneously, the interaction of these individuals—who may come together from local, regional, or even national areas—makes the courthouse a high-risk location for disease transmission. This risk is compounded by the fact that many court facilities were constructed decades ago and might lack appropriate systems for proper ventilation. In addition, the design goal for court buildings has generally focused on fitting as many courtrooms in as possible—which presents considerable obstacles for managing an airborne virus. To counter the threat of widespread disease transmission and in keeping with local and state mandates for public buildings, many courts quickly closed to the public at the beginning of the pandemic and have had to develop adaptations to allow their work to continue.

The courts are likely the largest convener of people &mldr; in [our state]&mldr;. On a typical day in our courthouses, we require or bring in &mldr; 1% of our [state’s] population, and a large percentage of those people do not have a choice about whether to attend, because we’ve ordered them to appear&mldr;. We have an obligation not only to those people but to the rest of the country to get it right, because if we don’t get it right, we can set the whole community, state, country back.

Some specific court services face critical time sensitivity. These services include protecting vulnerable people, such as children, the elderly, and people with disabilities; conducting preliminary hearings, bail hearings, and arraignments for criminal defendants; issuing protection orders in domestic or family violence cases in which victims fear for their safety; and issuing warrants and providing other support to law enforcement. Courts that closed to the public at the beginning of the pandemic needed to respond quickly to create space for these essential services.

In normal circumstances, court activities and timelines—particularly when defendants are held in custody because they cannot pay bail—are shaped by the requirement to protect a defendant’s right to a speedy trial. However, an early recommended practice for limiting the spread of the virus was the suspension of jury trials, which require large numbers of people to be brought together for extended periods of time. Limiting jury trials has required courts to suspend speedy trial requirements in many cases (see Figure 1).

There’s a huge tension, obviously, between defendants who’ve been sitting in custody &mldr; who have not had a court appearance in six months now since the beginning of [the pandemic] &mldr; and no trial in sight.

The suspension of jury trials in many areas has not only introduced concerns about defendants’ access to a speedy trial but also led to a large backlog of cases, compounding the backlog of other court proceedings that are simply taking time to churn through courts because of reduced capacity. These backlogs are growing in spite of other efforts to reduce the flow into the system, such as law enforcement postponing arrests and citations, prosecutors declining to file charges for low-level offenses, a reduction in the issuance of warrants or the suspension of existing warrants, increases in release without bail to reduce pretrial detention, and settlements of pending cases through plea bargaining. For cases that are still in the system under the suspension of speedy trial requirements, those requirements will be reimposed and the stakes for addressing the backlog will increase even further. Panelists described pending case numbers that amounted to multiple years’ worth of trial capacity, even under ideal circumstances, which will almost certainly not be the case for the foreseeable future.

We have an enormous backlog of felony cases. We normally carry about 2,500 at any time of pending unresolved cases. We now have 6,000 and another thousand cases that I could file tomorrow if they gave me a date for people to appear in court. So that’s a tremendous problem.

How Did Court Systems Adapt?

Now that everything is remote, we can use retired judges. We can use judges that aren’t so busy [in different regions of the state,] who were all connected. And so they could pick up the slack in places that are [busy], that are really overwhelmed with a backlog&mldr;. [E]specially if it’s judges who are currently working and already getting paid, it doesn’t cost the local jurisdiction anything to put that visiting judge to work remotely.

To address the challenges introduced by the pandemic and prevent the spread of the virus, court systems have taken a variety of steps, some of which represent major changes to how they have functioned historically. Pandemic adaptations have varied by jurisdiction because of differences in administrative structures, legal frameworks, and other factors that have constrained what actions could be taken in some parts of the country. Different types of courts also have had different constraints; for example, trial versus appellate courts, specialty courts focused on diversion processes, and other types of courts have faced different considerations regarding practical and effective adaptations. Across jurisdictions, some changes have had significant effects on the capacity of court processes. The following are some key adaptations implemented by court systems across the United States in response to the COVID-19 pandemic:

We’re almost all sales tax–funded. All of a sudden we went from an even budget to [a] $150 million hole &mldr; [and] my office was looking at a $9 million cut in the next biennium.

A significant number of pandemic-related adaptations implemented by court systems across the country involved shifts to virtual processes. In addition to practical challenges presented by virtual court models—for example, digital divides in accessibility and know-how—panelists highlighted a variety of concerns about the appropriateness of such processes. These concerns are relevant for courts that are currently implementing virtual processes and those that might consider such processes in the future. The following are some examples of considerations raised by the panelists:

So we have had cases where people have been arrested—and it makes it very uncomfortable, to be honest—people have been arrested, they plead, they get the pre-sentence process, they get sentenced and they’ve never actually been to court. They’ve never met their lawyer in person. They’ve never met the judge in person. Some of [the proceedings] aren’t even by video&mldr;. Is it necessary? Yes, obviously, but we have to recognize that some of these innovations are great and how quickly they came into being is great&mldr;. [But] we’re talking about a fundamental realignment of our system &mldr; [and while] a lot of these innovations, I think &mldr; are great for the system, so to speak, but may not be great for the human beings involved in the system, the litigants.

Promising Practices to Carry Beyond the Pandemic

Looking across the changes made in court systems, some appeared to be valuable in terms of strengthening the system to address future challenges and because they could be more broadly beneficial. Our panelists emphasized the following practices to consider carrying beyond the pandemic:

What Will Be Needed to Ensure That Practices Are Fair and Effective?

The panel discussions surfaced multiple questions, the answers to which would inform post-pandemic decisionmaking. Research efforts focused on these questions could provide a broader understanding of the effects of substantially adopting virtual technologies in particular and inform decisions for court technology and policy going forward. The following are some examples of research and evaluation questions proposed by the participants:

This report is part of the RAND Corporation research brief series. RAND research briefs present policy-oriented summaries of individual published, peer-reviewed documents or of a body of published work.

Permission is given to duplicate this electronic document for personal use only, as long as it is unaltered and complete. Copies may not be duplicated for commercial purposes. Unauthorized posting of RAND PDFs to a non-RAND Web site is prohibited. RAND PDFs are protected under copyright law. For information on reprint and linking permissions, please visit the RAND Permissions page.