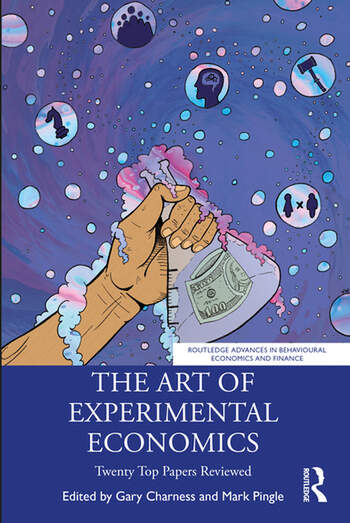 Here’s a forthcoming book that provides a unique and entertaining review of twenty influential papers in experimental economics. Katie Coffman and I wrote the review of the classic 2007 paper on gender and competition by Niederle and Vesterlund.

Chapter 3: The Strategy Method as an Instrument for the Exploration of Limited Rationality in Oligopoly Game Behavior (by Reinhard Selten)  Reviewed by Claudia Keser and Hartmut Kliemt

Chapter 13: A Fine is a Price (by Uri Gneezy and Aldo Rustichini)  Reviewed by Alex Imas

Chapter 14: Giving according to GARP: An Experimental Test of the Consistency of Preferences for Altruism (by James Andreoni and John Miller)  Reviewed by Catherine Eckel

Chapter 18: The Hidden Costs of Control (by Armin Falk and Michael Kosfeld)  Reviewed by Laura Razzolini and Rachel Croson

Chapter 19: Do Women Shy Away from Competition? Do Men Compete Too Much? (by Muriel Niederle and Lise Vesterlund)  Reviewed by Katherine B. Coffman and Alvin E. Roth

Here’s my Foreword to the book:

Twenty carefully chosen papers in experimental economics, reviewed and put in context by veteran experimenters, provide an excellent, close-up introduction to the richness and diversity of the field, and where it is coming from. These twenty papers appeared over a period of half a century, from 1962 to 2013, during which economic experiments went from being quite rare to taking their place among the standard tools of economics.

When John Kagel and I edited the Handbook of Experimental Economics, volumes 1 and 2 (1995 and 2016), we encouraged the chapter authors not to try to tell readers how to do good experiments, but to show them. And so it is with these papers: there are lots of ways to do good experiments, and here is a collection of twenty that have been influential. The reviews make clear that a successful, influential experiment is part of a scientific conversation that began well before the experiment was designed and conducted, and continued well after it was published and replicated. These conversations aren’t only among experimenters, nor are they only among economists: experiments add to scientific conversations of all sorts, answering some questions and raising others, often questions that couldn’t even be posed with equal precision in naturally occurring environments.

Reader, beware. After reading this volume, you will want to read more, and, your curiosity aroused, may find yourself on the slippery slope of designing and conducting your own experiments.