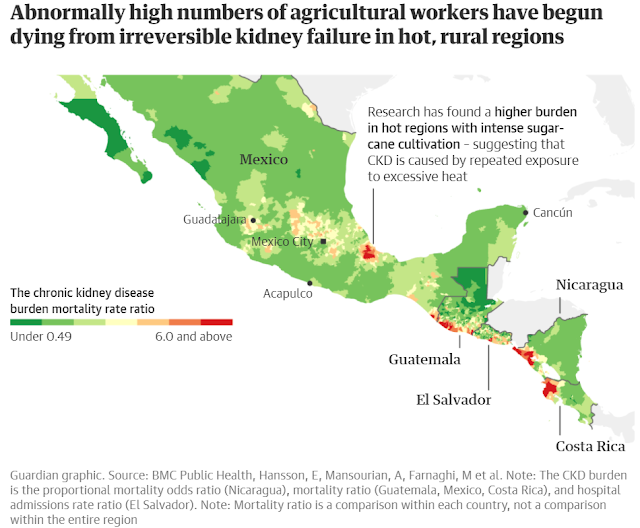 When I visited the UAE this past summer, I learned that it has high rates of kidney failure, attributed to the very high temperatures that outdoor workers experience there. Here’s a story that says that’s a problem in other hot places, and therefore likely to get worse as the atmosphere heats up. It’s a further reason why it makes sense to expand kidney exchange across borders, and not just among wealthy countries.

The Guardian has the story:

Global heating ‘may lead to epidemic of kidney disease’. Deadly side-effect of heat stress is threat to rising numbers of workers in hot climates, doctors warn  by Natalie Grover

"Chronic kidney disease linked to heat stress could become a major health epidemic for millions of workers around the world as global temperatures increase over the coming decades, doctors have warned.

"More research into the links between heat and CKDu – chronic kidney disease of uncertain cause – is urgently needed to assess the potential scale of the problem, they have said.

"Unlike the conventional form of chronic kidney disease (CKD), which is a progressive loss of kidney function largely seen among elderly people and those afflicted with other conditions such as diabetes and hypertension, epidemics of CKDu have already emerged primarily in hot, rural regions of countries such as El Salvador and Nicaragua, where abnormally high numbers of agricultural workers have begun dying from irreversible kidney failure.

"CKDu has also started to be recorded as affecting large numbers of people doing heavy manual labour in hot temperatures in other parts of Central America as well as North America, South America, the Middle East, Africa and India.

"Dr Ramón García Trabanino, a clinical nephrologist and medical director at El Salvador’s Centre of Hemodialysis, first noticed an unusual number of CKD patients saturating his hospital as a medical student more than two decades ago.

“They were young men,” he said, “and they were dying because we didn’t have the budget or the capacity to give them dialysis treatment. We did the best we could, but they kept dying and more kept coming.”

"Since then he has started researching similar epidemics in Mexico, Nicaragua, Costa Rica and Panama."