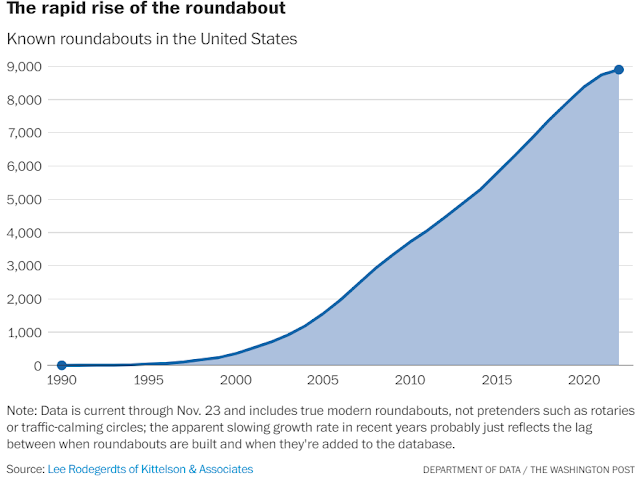 Roundabouts are (slowly!) eating the suburbs by Andrew Van Dam

"Compared with the hundreds of thousands of normal intersections peppering the American landscape, ruled by stop signs and traffic lights, roundabouts are rare beasts. But unlike the drivers they frequently confuse and bedevil, roundabouts are coming on fast.

"The modern roundabout relies on a geometric design that forces traffic to slow, plus a simple innovation born in 1960s Britain: the rule that people already in the circle get the right of way. In traditional rotaries and traffic circles, which still lurk in many East Coast cities, traffic moves faster and vehicles already in the circle often must yield to newcomers.

"Why add a roundabout, you might ask. Because roundabouts offer impressive safety gains. In general, a roundabout will drive down fatal crashes by 90 percent and cut all car-crash injuries by at least 75 percent, even while accommodating a higher volume of cars.

"At a rural two-way stop, the gains can be even more dramatic. A roundabout can slash all traffic injuries, both fatal and nonfatal, by almost 90 percent. After all, it’s almost impossible to blow through a roundabout at 60 miles an hour and T-bone a minivan — an all-too-common occurrence in typical rural intersections.

“That’s the beauty of the roundabout,” Rodegerdts told us. “It’s the geometry. It’s the curves that are doing the work. And not relying on a traffic-control device as the sole thing keeping you from colliding at high speed.”

Nevertheless…here’s a related NYT story:
The Exceptionally American Problem of Rising Roadway Deaths
Why other rich nations have surpassed the U.S. in protecting pedestrians, cyclists and motorists. By Emily Badger and Alicia Parlapiano

"In 2021, nearly 43,000 people died on American roads, the government estimates. And the recent rise in fatalities has been particularly pronounced among those the government classifies as most vulnerable — cyclists, motorcyclists, pedestrians.
…
"In the 1990s, per capita roadway fatalities across developed countries were significantly higher than today. And they were higher in South Korea, New Zealand and Belgium than in the U.S. Then a revolution in car safety brought more seatbelt usage, standard-issue airbags and safer car frames, said Yonah Freemark, a researcher at the Urban Institute.
"Fatalities fell as a result, in the U.S. and internationally. But as cars grew safer for the people inside them, the U.S. didn’t progress as other countries did to prioritizing the safety of people outside them.
“Other countries started to take seriously pedestrian and cyclist injuries in the 2000s — and started making that a priority in both vehicle design and street design — in a way that has never been committed to in the United States,” Mr. Freemark said.
"Other developed countries lowered speed limits and built more protected bike lanes. They moved faster in making standard in-vehicle technology like automatic braking systems that detect pedestrians, and vehicle hoods that are less deadly to them. They designed roundabouts that reduce the danger at intersections, where fatalities disproportionately occur.
"In the U.S. in the past two decades, by contrast, vehicles have grown significantly bigger and thus deadlier to the people they hit. Many states curb the ability of local governments to set lower speed limits. The five-star federal safety rating that consumers can look for when buying a car today doesn’t take into consideration what that car might do to pedestrians." 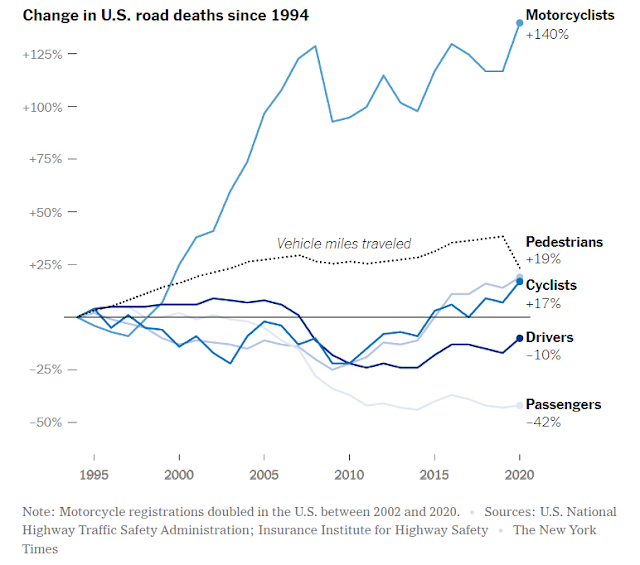